How FJD Tractor Autosteer Has Been Reducing Farmers' Input Costs?

As farmers across the northern hemisphere start their spring planting in 2022, they are facing yet a pricing chart that is even more ridiculous than 2021 — fertilizer and fuel pricing have hit their all-time highs, stressing not only farmers’ nerves but also every living soul as the short supply of fertilizers and fuels are causing crop switches or less application of fertilizers, resulting in decreased quantity and quality in yield and spiked food price in the end.

"Believe me, if the prices of the crops go cheap, we will go bankrupt. There is no plan in place, but we will continue to plant (our crops) and we hope to get a more productive season and sell at high prices," tells Muhammed, a Turkish farmer.

"Not only inflation but the increase in all expenses will greatly affect the income this year. Our expenses this year will be triple what they were last year. Just gotta push through it," says Ronnie, a Texas-based farmer.

"In 2020, the liquid nitrogen fertilizer was priced at €170/ton, over €600 in 2021, and €850 now," says Julien, an FJD French dealer and also a fifth-generation farmer. He started using animal waste to fertilize his soil back in 2021, trying to offset the influence of the overpriced fertilizer.

Precision Agriculture Is Part Of The Solution

The incorporation of a precision autosteer system into the farming operation has immediate impacts on the efficient use of inputs such as seed, fertilizer, and chemistry. By driving a precise route over the field, farmers reduce overlap rates of passes. This is particularly important for expensive inputs such as seeds and fertilizer.

"In a 600m-long-40-acre field this year, using gps tractor autosteer as compared with working by eye, I had 4 meters less to sow, spray, and fertilize. That's over half an acre less," explained Ali Craig, a Northern Irish farmer who managed a 500-acre farm, growing barley and grass. 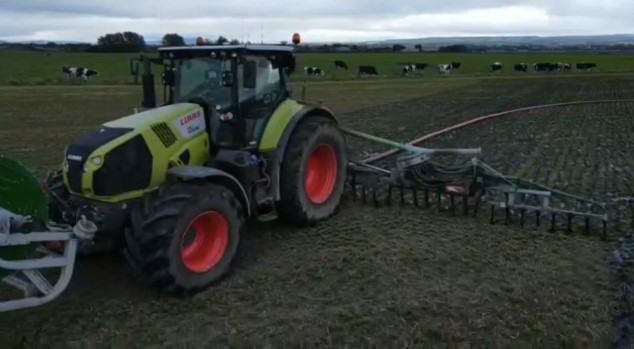 The precise seeding and fertilizer application not only reduces waste but also increases the accuracy of application, which gives the plants the right conditions for growth and increases the viability of cultural weed control through cultivation.

"To utilize fertilizers in a well-informed way, we also use Decision Support System to analyze the soil and enrich it with the right amount of fertilizers. So each plant can absorb what it needs in a precise way," said Julien as he was incorporating autosteer and DSS in his precision farming.

"I sprayed 200 hectares of soy and it saved me about R30K, which equals to $2,000, just by not spraying twice at places," told Adriaan Frourie in an interview. “I over-sprayed 20 hectares the first time. Then I worked with autosteer for the second time. I not only sprayed 20ha worth of herbicides less but also covered (the field) with no missing spots."

Efficient use of chemistry such as pesticides and herbicides makes financial sense and increases crop performance. Reduced overlapping of spray booms allows for a much more precise application of chemistry. In the past, some sections of the crop may get a double dose or none, depending on the topography or driver concentration.

This precise chemical application increases the amount of crop you can cover with the same amount of chemicals and reduces the negative impacts of over or under-dosing. An added benefit of increased application efficiency is that fewer chemicals are being used on the farm. It also means there is less chemical handling which helps to reduce the potential impacts on farmers and the environmental health as a whole.

With the growing population on planet earth, it stresses the international community to grow more food. But with climate change, disrupted supply chain, and soaring production input pricing, farmers are challenged. Thus, it makes financial sense to spend their hard-earned money on crops wisely.

Tractor autosteer is part of the precision farming solution as it allows farmers to avoid skips and overlaps, sow, spray, and fertilize their fields in a precise manner, optimizing the utilization of their soil and the production inputs.