How is FJDynamics Autosteering Kit helping farmers across the globe?

Compaction can be a significant issue for many growing regions, some researchers estimate that compaction can reduce crop yields by up to 60%. The worst thing about compaction is that it is not immediately apparent that plant health is being impacted. Even mildly compacted fields can have reduced crop yields. Autosteer can help reduce compaction.

Using gps tractor autosteer, farmers control the traffic on the paddock and restrict heavy machinery to specific paths, thereby reducing the compaction on the rest of the paddock. This has an immediate impact on the soil by improving soil structure, increasing water holding capacity, and increasing soil organic matter and soil biological activity. These improvements in soil quality and structure directly translate into increases in crop growth and yields.

Rancher Mike from Wyoming was creative with his FJD autosteer. When the winter hit, he had to go out to the hay yard to fetch the hay. The task was tremendous as he had to go in his John Deere 640 across the ranch, which oftentimes was covered in snow. To make less compaction on the ranch soil, he then steered the John Deere from the starting point – his shop – to the hay yard and had the FJD tractor autosteer system memorize the whole route. By doing this, he was able to repeat the same route over and over again, limiting compaction to that trail only. The other parts of the ranch were left undisturbed. 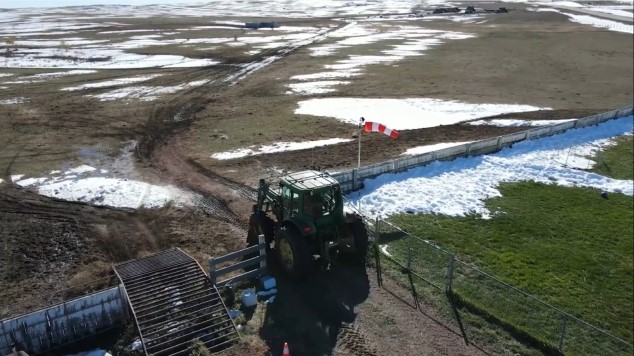 The route between Mike’s shop and his hay yard, which was oftentimes covered in snow in winter.

An added benefit of these ‘tram tracks’ is that it creates a more compact, solid pathway for machinery to travel, which allows farmers to operate more confidently in wetter conditions without bogging down. 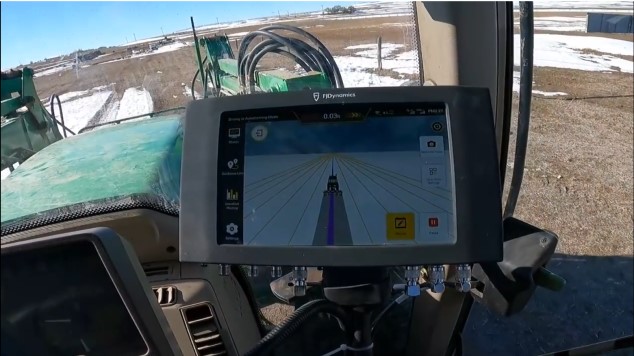 Rancher Mike from Wyoming in his John Deere 640, which was on its way to the hay yard along a memorized route.

Taking precision agriculture one step further, an gps tractor autosteer system, matched with detailed soil mapping allows farmers to get very precise with their inputs. Coupling an autosteer system with a variable rate fertilizer applicator allows the farmer to control exactly how much fertilizer goes on which areas of the field. By doing this, the farmer can grow a more consistent crop without wasting money on lower fertility areas.

These examples only scratch the surface of the potential for precision agriculture which is only possible with an accurate autosteer system. Not only does tractor autosteer save you money and help you grow better crops with higher yields, but it also makes your farming operation safer and more enjoyable.

Julien’s winter barley in his own farm. Photo taken in November, 2021

Tractor autosteer helps to reduce the fatigue and pressure felt by machinery operators. In traditional systems before autosteer, machinery operators would spend three-quarters of their time navigating the field and trying to drive straight rows. Hours of intense concentration cause great fatigue for operators who, as they become more and more tired, make (sometimes very expensive) mistakes.

“Autosteer not only makes all other tasks more efficient but takes so much stress off your body while running equipment. Having to constantly keep straight while checking your equipment behind kills your neck and back and is mentally exhausting,” said Joey Koebelen, a peanut farmer based in Oklahoma and FJD dealer.

The implementation of autosteer reduces the requirement for drivers to concentrate 75% of their time on navigating and allows them to relax and concentrate on the safety and quality of the job. This reduction of mental workload allows operators to put in more hours of higher quality work with fewer breaks. This means that drivers are happier and more productive on the tractor, but it also means that there is a better agronomic outcome for the farm, fewer mistakes, and less wear and tear on machinery.

For many farming systems the return on investment for an autosteer implementation is measured in a matter of months not years, but more importantly for is that farmers and drivers are less fatigued, more engaged, and happier.

Each farm and production system is different with its unique challenges. Each farm will have a different requirement from an gps tractor autosteer product and will have different cost structures which impact the return on investment. Most farmers who maximize their investment through the implementation of a precision agriculture system will reap the rewards of improved soil structure, water-holding capacity, soil organic carbon, and biological activity, which result in increased productivity and yields.

Plus, in some parts of the world, i.e., England, the state governments are going to decide their subsidies to farmers not based on farm size as they did in the past, but based on how farmers manage their farms including carbon footprint with minimal crop passes, which require accurate and precise navigation.